Enthusiasm marked the first season of Digital India Awards (formely known as WebRatna Awards), an initiative to acknowledge the exemplary initiatives in e-Governance.

Twenty eight awards were given under eight categories. The Hon'ble Minister later released the awards compendium containing the details about the award winning initiatives 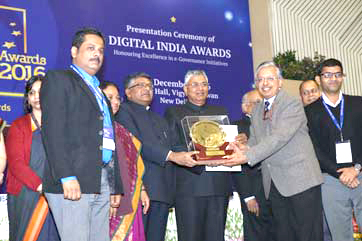 Three Awards - Platinum Icon, Gold Icon and Silver Icon have conferred in each of the following eight categories:

The Award shall facilitate those ICT based services by a Government Department (Central/State) which have displayed exemplary citizen focus, reach, scope and innovation in approach. The service should have effectively contributed to enhancement in efficiency, productivity as well as in imparting transparency and accountability in the governance process. The winning entries should display extent of service maturity and the convenience provided to the citizen for availing the services.

To acknowledge proactive release of resources(datasets/apps) in an Open/Machine readable format, on the Open Government Data (OGD) Platform (http://data.gov.in), by the ministries/ depts./ organizations/ states in compliance with the National Data Sharing and Accessibility Policy (NDSAP). The selection criteria includes overall consumption of resources by public at large with respect to their ratings, views, downloads etc. Potential usage of such datasets for development of Apps to deliver citizen services innovatively would be an added advantage.

In a democratic system, citizen participation is one of the key components of decision making process. The Award aims to honour initiatives taken by Government entities which have leveraged the use of ICT to solicit active engagement of public in the process of governance. The winning entries should display relevance of context, multiple modes of participation, involvement of stakeholders and innovative use of ICT, both for response acquisition as well as for analysis of inputs received.

The Award aims to felicitate outstanding Local Body initiative with a focus on providing exemplary information quality, extent of services provisioning by assessing the service maturity level, service catalogue, transparency, cost effectiveness and efficiency enhancement in terms of service delivery. The entries would also be assessed on the level of convenience or empowerment provided to the citizen through the initiative.

India is going mobile. More people today are accessing the internet on their phone than ever before. The Award aims to honour the Best Mobile App launched by a Government entity. Nominated app should have well designed and intuitive mobile interface. The entry should also display ease of use and personalisation features. Usability, content organisation and availability on multiple platforms will be considered. Back end dashboards and analytics functionality are desirable.

The Award shall felicitate a Ministry or Department of the Government of India which has a comprehensive web presence and display the level of accountability in terms of quantity, quality, spectrum of coverage, innovation and performance report ascertaining user satisfaction. Level of convenience provided to the citizen for availing the services, usability and accessibility would also be assessed.

The Award aims to acknowledge the State/UT of India for displaying exemplary initiative in establishing comprehensive web presence and display the level of accountability in terms of quantity, quality, spectrum of coverage, innovation and performance report ascertaining user satisfaction. Level of convenience provided to the citizen for availing the services, usability and accessibility would also be assessed.

To reward the accomplishments of the District administration which has displayed exemplary focus on providing online services and information to the citizens . Entries must display the level of convenience provided to the citizen for availing the services in terms of accessibility, quantity, service maturity and spectrum of coverage in order to ascertain user satisfaction in its web based information & service delivery initiative.